Eric Sheninger, Senior Fellow and Thought Leader on Digital Leadership with the International Center for Leadership in Education (ICLE)and Scholastic Achievement Partners (SAP), kicked off the 2015 Leading Future Learning conference with his keynote on Digital Leadership. A former award-winning principal from New Milford, NJ, he is currently the K-12 Director of Technology and Innovation in the Spotswood School District (NJ).

Eric’s journey started about 10 years ago when he was hired to be an administrator in the New Milford school district in New Jersey. Despite being surrounded by “high performing” schools, New Milford was not one of them. 30% of the population was classified as special needs and 5% were ELL learners. It was a primarily blue collar population, a diverse population both economically and socially, as well as a school with infrastructure issues. For 5 years, they felt as though they were the “hamster on the wheel.” However, they changed everything happening in the school and over that time, they improved every metric on which they were evaluated – test scores, attendance rate, discipline issues, etc. What they had to do was create a school that was better for their kids.

“If it is important to you, you will find a way. If not, you’ll find an excuse.”

Excuses and opinions will not do anything to change systems. To create change, to be a leader, it’s about taking action and leading by example.

“Leadership is action, not position.”

Every one of us has the capacity to lead change. The world is changing, and the educational landscape is changing, and if we don’t keep up with the change then we become disconnected from our primary “boss” – our students. It’s not so much that our students learn differently, it’s that the environment in which they learn has changed.

As an example, Eric tells about his son playing Minecraft. In watching this interaction, he sees that his son is communication, collaborating, thinking critically, and creating a product that has meaning. As a self-directed learner, he also created his own YouTube channel full of tutorials. The significance is that he doesn’t get a grade or positive reinforcement. He did this because he wanted to teach others. However, his son also hates school because he is bored.

Question: why are we perpetuating an out of date system?

Education is focused on compliance and rules that don’t make sense. Students walk into school and suddenly feel a disconnect: 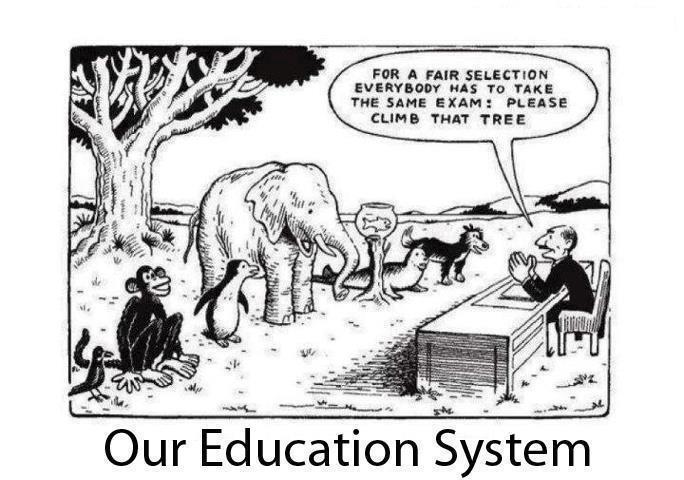 Eric then shows the difference between school and life. With school, subjects are organized into clearly defined “buckets,” while in life, nothing fits into neat containers. At the same time, students are punished for not having a pencil as well as for using a device.

Social Media is a Game Changer

For years, Eric had his “excuse card.” He didn’t have time… Kids would cheat… It wouldn’t help learning… He had banned devices and technology, essentially creating a jail in his school. However, in 2009, he came to the revelation that social media would help him become a more effective communicator. At that point, he started to reach out to stakeholders and try to improve communications.

From there, he began to lurk. At that point, he saw that social media was a gateway to what’s possible. In doing that, he was able to see what other schools and educators were doing to get results. That shined a light on how focusing on conformity and rules were not allowing them to get the results that they wanted. While technology and social media won’t be a silver bullet to solving the problems in education, it allowed them find ways to do improve upon their current practices in order to arrive at goals in a more enhanced fashion.

“Social Media is a Catalyst for Conversation to Improve Professional Practice”

What can we do better for our kids:

In education, teachers and administrators control everything. However, students should experience true ownership of learning through voice and choice.

Digital leadership is not new construct of leadership. It’s about changing mindset from fixed to growth to complement the work that you’re already doing.

“If a child can’t learn the way we teach, maybe we should teach the way they learn.” – Ignacio Estrada

Today’s kids want to do real world work with real world tools. They want to be engaged in learning. However, technology is a tool and not a learning outcome. Technology is to expand learning, amplify voice, and put them in positions to have powerful discussions. Technology breaks down walls. The golden rule for New Milford was pedagogy first, technology next. Teachers were empowered to take risks, given access and tools, but never forced to “use technology.” It was all about pedagogy and not the tool. They stopped preparing students for a test, and began focusing on essential skills to prepare students to be learners and successful after school.

Eric and his faculty then addressed the Rigor/Relevance framework.

It became a uniform focus on how technology would impact learning and whether or not it impacted learning. As a team, they collected assessments and collaborated as a team to ensure that technology had a purpose and a role to enhance learning and increase productivity. They changed the landscape to empower kids to use the tools that they wanted and create the artifacts that had meaning. Students could learn anywhere that they like.

Eric asks, would you want to be a student in your classroom? Does it look like the real world? Is the school designed to support students? They created an environment like the real world that would make kids want to go to school. Their graduation rate increased from 80% to 98%.

Over 5 years ago, they went BYOD with the focus on how will devices be used to take ownership of learning. When excuses such as “it’s not equitable” got in the way, they either gave kids devices or used cooperative learning.

The focus was always on learning, and they began by creating an Academies model inside of the school. This allowed kids to create learning situations that fit their interests.

The key to change is being able to build a Personal Learning Network. Eric says that without making valuable connections to smart people, then he would not be the leader that he is.

Eric used an 80/20 model to encourage Professional Growth. He cut all non-essential functions in half to free up time for exploration. This encouraged teachers to follow their passions and improve their practice. Their librarian even created a Digital Badge program to award teachers for their efforts and to add to their digital portfolios.

Everyone is doing great work, but Eric is recognized because he told his story. Digital Leadership is about telling your story better than anyone else. Public Relations became a reality because of their transparency and the fact that they published their learning to showcase their innovation.

In education, we don’t brag enough about the great work that we’re doing and how we’re using technology with purpose. It helps to spread the word and build stakeholder support. Eric keeps repeating that everyone is doing great work and everyone has a voice. The key is to be sharing that work and putting it out for the world to see.

Digital leadership is about creating opportunity and building a school that works for the students. It’s not about buy-in, but giving teachers ownership so that they embrace change.

The person who says it cannot be done should not interrupt the person who’s doing it. – Chinese Proverb